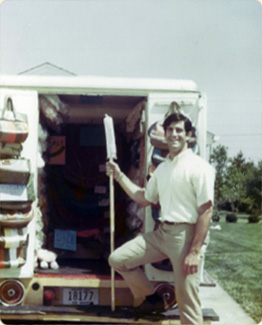 James O. Bonaminio was born in 1949 in Lorain, Ohio, 30 miles outside of Cleveland. His father, Clem, was a steelworker, his mother, Marie, a housewife and sometime saleswoman. For a while, she peddled Fuller brushes door to door. Pushing a baby buggy, she discovered, was a terrific ice-breaker. Jim swears he remembers hearing sales pitches from inside the carriage!
By the time Jim was 6, he was eager to start earning money for himself. He began by offering to do odd jobs for neighbors. By the age of 13, he was collecting golf balls from a nearby course scrubbing, and then selling them to avid golfers. In high school, he washed cars and trucks for Ohio Edison. He was hitchhiking five miles to their parking lot, hauling his own hose, bucket, and rags. At age 19, he worked out deals to sell pillows, carpet remnants, and purses. Jim stocked the 1948 milk truck he’d got for $50 and became a garage sale on wheels! 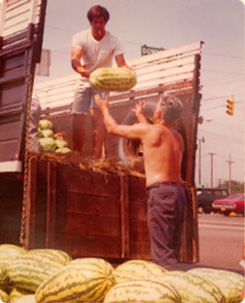 After purses, produce looked easy, but it wasn’t. Jim thought he was doing everything right by buying directly from farmers. He offered rock-bottom prices and set up a stand where motorists could see him. But they passed by the nondescript peddler, then stopped down the road for someone they recognized. He was about to give up when he realized, it all had to do with being established.
That night he got a phone call from a farmer who had 45,000 pounds of white potatoes that had been rejected from a potato chip factory. He’d sell them for $150, but was Jim interested? A light bulb went off in Jim’s head. “Yeah,” he replied, “if you’ll leave us your truck for the weekend.” Jim bought two baby scales, donned a white apron, crayoned a large sign offering 20 pounds for 75 cents. Then hired a couple of 10-year-olds to bag and weigh. Suddenly, he was a recognizable merchant. 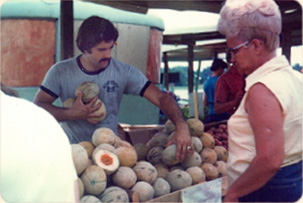 In 1971, he set up his first semi-permanent produce stand in a parking lot, on the corner of Erie and High Street in Hamilton. He worked 21-hour days, slept on the premises and showered under a hose, behind the building. When the place sold, he had to move. The same thing happened with several other locations, including the corner of Symmes and Route 4, in Fairfield. Vacant lots that had gone unnoticed for months, suddenly became hot when he landed on them. Jim mused that he’d missed his calling, he should have probably gone into selling real estate! 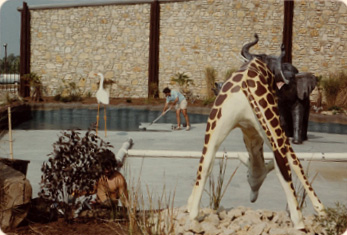 In 1974, he found the land he wanted to purchase. Owners Jim Ivers and Bruce Cunagin were willing to sell, but a $10,000 down payment wasn’t enough. They insisted he’d need a co-signer. There was a silence. Then Bruce’s mother, Fanny, a third owner spoke up, “I’ll co-sign.” Jim Bonaminio now believed in guardian angels. He had two, Fanny Cunagin, and Esther Benzing. Esther was president of Fairfield’s planning commission. In 1975 city officials were reluctant to okay a permit for a fruit and vegetable market because the area was zoned industrial, not commercial. The commission admitted an exception had been made, for a nearby Arthur Treacher’s because that was where workers ate lunch. “What’s the difference,” Esther queried, “between having a fish sandwich and having an apple or an orange?” She banged her gavel and said, “Permission granted and good luck son.”

Excerpted from an article by Coleen Armstrong

Check out our video and photo gallery!