Holidays at the Jungle – Why You Need Raclette This Holiday Season 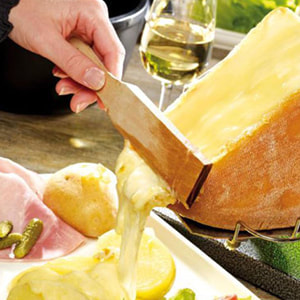 ​Ever walk into a holiday party and wonder what that smell is? Hopefully, what you’re smelling is someone melting Raclette and getting ready to serve it alongside boiled potatoes or steamed veggies.

Raclette both refers to the cheese itself or the dish, and comes from the French word, racler, meaning “to scrape.” You can melt Raclette cheese on a traditional Raclette melting pan and it’s sure to be a hit at your party (or parties) this year. Fair warning, though: it’s a pungent cheese, so the experience can be a little intense at first. Luckily, it’s incredibly easy to get past aroma and fall in love with the cheese and the process.

Of both French and Swiss origin, Raclette has been enjoyed since the late 1200’s, but like all good things, people are still discovering it and realizing that Raclette with boiled potatoes is one of the best appetizers or side dishes that we’ve so far created. We suggest that you try versions from both areas – you won’t be able to decide which you prefer.

To take things over the top, serve with a little Chenin Blanc and some Gherkins alongside the melted cheese. You won’t be disappointed.

You can find both French and Swiss Raclette at The Cheese Shop inside both Jungle Jim’s locations. French Raclette Livradoux is $11.99/lb, and Swiss Emmi Raclette is $13.99/lb.