Barbecuing Around the World

Back to feed
Comments Off on Barbecuing Around the World

Barbecue is an American staple, but cultures around the world have their own ways of cooking a great cut of meat. The one thing they have in common? They’re all delicious! This summer, add an international flair to your summer cookouts and learn more about international barbecuing styles with Discoveries at the Jungle Barbecue.

A tandoor is a tall, cylindrical clay oven that is used throughout the Middle East, India, Pakistan, and other parts of Asia. The clay material and the design of the tandoor, specifically its bell-shaped mouth, work to trap and concentrate heat for long periods of time, making it highly energy-efficient. 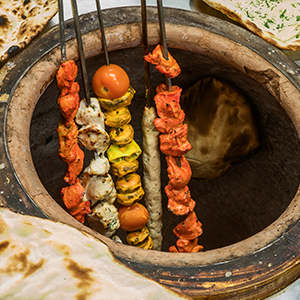 Though there are now gas-fueled tandoors on the market now, tradition tandoors are heated by kindling a wood or charcoal fire in the base of the oven. This can cause the oven can reach temperatures of up to 900°F! The oven can maintain its high temperature for hours or days, even if the fire is allowed to die down to coals. Because it takes a relatively small amount of fuel to create a great deal of heat, tandoors are very popular in areas where wood and other types of fuel are scarce.

The tandoor uses four different methods to cook food: direct heat from the hot coals in the base of the oven, convection heat from the contained hot air, and smoking from the marinade and hot fats that drip from the food into the fire below. Plus, the wall of the tandoor can be used as a griddle or skillet.

Many different foods can be cooked in a tandoor, but most people immediately think of naan, an Asian flatbread, when they think about the tandoori oven. Naan is made by slapping dough on the interior surface of the tandoor, which is extremely hot. It cooks quickly, and is peeled off to be served after only a few minutes. The unique interior of the tandoor imparts a smoky flavor that is almost impossible to replicate through any other cooking method.

Another popular dish is tandoori-style meat, most often tandoori chicken. To make tandoori chicken, the meat is marinated twice, once several hours before cooking and once more immediately before, then skewered and placed vertically inside the tandoori or laid horizontally across the mouth of the oven. The high temperature in the tandoor oven cooks the meat quickly, but the resulting food is always tender, moist, and delicious!

If you’re looking to try Japanese-style barbecue, look no further than yakiniku! Yakiniku refers to the practice of serving very thinly sliced meat and grilling the food tableside for a fun, interactive dining experience. Often, the yakiniku meat is beef, specifically Wagyu beef, but it can be chicken or shrimp. 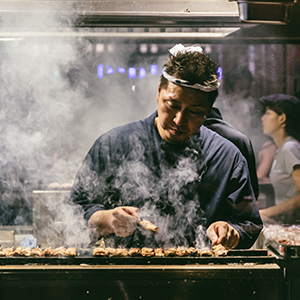 Yakiniku was created in the mid-1900s as a post-war, Korean-inspired dish. Some historians believe that it was actually served as Korean food at first, while others say that it was inspired by Korean cuisine but was a Japanese creation. In any case, yakiniku is similar to Korean bulgogi (a meal of thinly sliced, marinated beef) but it is also distinctly Japanese with its own customs and traditions.

For one, yakiniku is never prepared with any sort of seasoning or marinade. Yakiniku emphasizes the natural flavor of the meat, so adding excess seasonings is thought to ruin the experience. Often, the meat is only flavored with a pinch of salt. Dipping sauce, however, is permissible and is often made from mirin, soy sauce, and sesame oil. It may be used after cooking, but never before.

To make yakiniku, it is imperative that you use an extremely hot grill. That way, the meat will cook quickly and will not stick to the cooking surface. Grills are preferred because they allow fat from the meat to drip through the grill and into the flame, creating smoke that flavors the meat. However, if you don’t own a tabletop grill system (and who does?) you can make yakiniku at home in a pan. Simply stop by Jungle Jim’s to purchase your meat (shabu shabu meat is a great choice, as it is already sliced), then cook the meat quickly, piece by piece in a very hot pan. Enjoy with rice, steamed vegetables, and dipping sauce! 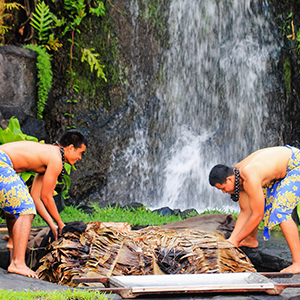 If you’ve ever been to a Hawaiian-style pig roast, you’ve most likely enjoyed kālua pork! This traditional dish is quintessentially Hawaiian and has been a staple in the islands for hundreds of years. Once you try authentic kālua pork, it’s easy to see why. The extensive underground slow-roasting process imparts a unique, smoky flavor that is second to none and quickly turns first-time culinary adventurers into lifelong kālua advocates!

The word “kālua” translates to “cooked in an underground oven.” Thus, “kālua pork” simply means pork that was cooked in an underground oven. In Hawaiian, the underground oven is called an imu and is made by digging a large hole about two to four feet deep and wide enough to accommodate the food. Once the imu is created, a fire is lit at the bottom of the pit and rocks are added to the flames. After several hours, the fire is banked and the heated stones are evenly distributed around the bottom of the pit, then covered with banana leaves. The food, usually a whole pig, is placed on top of the leaf-covered rocks, then the pig is covered with an additional layer of leaves. Finally, the entire pit is covered with dirt.

The pig cooks in the underground imu for several hours before it is removed and the slow cooking process ensures that the pig is moist, succulent, and flavorful when it finally emerges from the oven! The combination of the initial wood fire and the banana leaves imparts a smoky flavor that is truly unparallelled, which is why kālua pork is so beloved by those who have tried it.

Churrasco is the Latin American term for barbecue! It originated in Brazil, but is now popular in a variety of South American countries, including Argentina, Bolivia, Peru, Chile, and many more. Most often, churrasco is beef or steak but can be pork, sausage, or chicken. 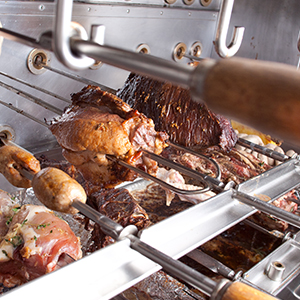 As the story goes, churrasco was first invented by gaúchos, Brazilian cowboys, in the 1800s. After a long day out on the ranch, the gaúchos would return at dinnertime and light bonfires in large pits. Whole families would gather around the fire and, once the fire calmed and died down some, meat would be skewered and roasted over hot coals or embers. Traditionally, the meat was only seasoned with salt or basted with saltwater, which helped to keep the meat moist during the cooking process.

Nowadays, you probably won’t find many gaúchos building firepits out in the cattle fields, but you can visit a churrascaria, a Brazilian steakhouse, to get a taste of authentic churrasco. At churrascarias, diners pay a flat rate, similar to a buffet, and are served by waiters who roam the restaurant with huge skewers of meat. Churrasco can be made from more than twenty different cuts of meat, but the benefit of visiting a churrascaria is that you can try a slice of all of them!

Cuts vary by country, but the most popular churrasco cut is picanha, a choice cut of top sirloin that is cooked with salt. Even if you don’t have time to dig a bonfire pit in your backyard to roast skewered steaks like the gaúchos of old, you can still enjoy picanha at home! The easiest at-home method is to sear the steak on the stove or on a grill, then transfer to the oven to finish cooking. But be careful! The thick cap of fat can cause flare-ups on the grill, which can burn your steak or cause injury. This is why we recommend finishing the steak in the oven. For more specific directions, check out this recipe on our website!