Back to feed
Comments Off on Discoveries at the Jungle Beverage Month: Almdudler Soft Drinks from Austria and Ting Sparkling Beverages from Jamaica 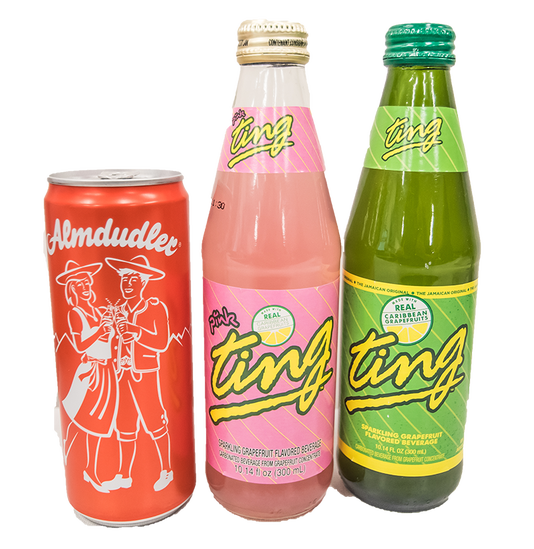 This drink was first created in 1957 by Erwin Klein and has a light, refreshing, and sweet flavor. 32 natural alpine herbs are used in the production of this soda. It’s popularity in Austria is second only to Coca-Cola and has been called the national drink of Austria, with 80 million litres produced each year.

Where you can find these: Fairfield Location: Orange 18 // Eastgate Location: Yellow 6

​Did you know? When Coca-Cola first launched it was marketed as a nerve tonic that “relieves exhaustion.”

This tart yet sweet drink is made with real Jamaican grapefruit. You may even get a little grapefruit pulp in your bottle. After being purchased by Pepsi Co in 1999, these drinks started finding their way into the US, Canada, and the UK. Many people like to mix these drinks with citrus vodka or Jamaican rum.

Where you can find these: Fairfield Location: Yellow 10 // Eastgate Location: Green 4

​Did you know? Pepsi was the first soft drink company to use two-liter bottles.

Catch the other featured beverages from this month here:
Shirakiku Ramune from Japan and OKF Aloe Drinks from China
Hawaiian Sun Soft Drinks and Teas from Hawaii and Mezzo Mix Orange Cola from Germany