Back to feed
Comments Off on Discoveries at the Jungle Beverage Month: Antarctica Guarana Soda from Brazil and Niasca Limonata Sparkling Lemon Beverage from Italy 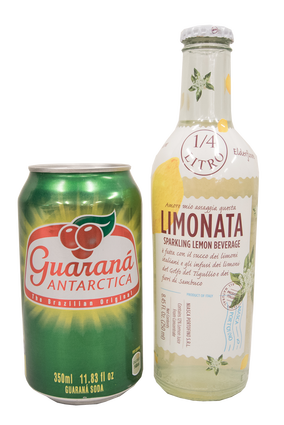 The Jesuit priest João Felipe Bettenford “discovered” the fruit of the guaraná when observing the Maués Indians during an expedition by the Upper Amazon in the 1600s. They would use the fruit to make “tea” that brought them strength. As the popularity of guarana grew, more and more people around the world recognized it for giving them extra energy. Think of this citrusy soda as Mt. Dew on steroids, for when you need an extra kick.

Where you can find these: Fairfield Location: Yellow 10 // Eastgate Location: Pink 10

​Did you know? Guarana contains twice as much caffeine as coffee

This sparkling beverage is made with Italian lemons from Tigullio. It’s neither too sweet or too sour and is very thirst quenching. Think of it as a high quality lemonade that is also fantastic for mixing into drinks.

Where you can find these: Fairfield Location: Yellow 8 // Eastgate Location: Green 6

​Did you know? Lemonade can trace its origins to the Egyptians, when in 500 AD lemon juice was mixed with sugar to make a beverage known as qatarmizat.

Catch the other featured beverages from this month here:
Shirakiku Ramune from Japan and OKF Aloe Drinks from China
Hawaiian Sun Soft Drinks and Teas from Hawaii and Mezzo Mix Orange Cola from Germany
Almdudler Soft Drinks from Austria and Ting Sparkling Beverages from Jamaica
Solo Orange Soda from Norway and Bundaberg Ginger Beer from Australia