Back to feed
Comments Off on Discoveries at the Jungle Beverage Month: Solo Orange Soda from Norway and Bundaberg Ginger Beer from Australia 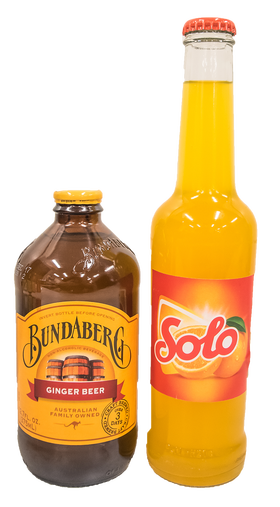 ​Solo got its start in 1934 with a Spanish recipe. Solo is a thirst quenching orange soda which was bigger than any other drink in Norway (even bigger than Coca-Cola) until 1999 when Pepsi passed them in market share.
Where you can find these: Fairfield Location: Scandinavian Section // Eastgate Location: Yellow 4

​Did you know? First flavored soda drinks appeared in Europe in second half of 17th century. They were most popular in France.

Australia’s favorite! This ginger beer is brewed from a family recipe that has been handed down through many generations. It’s made with locally grown ginger and sugarcane, which gives it the freshest taste possible. They instruct you to hold the bottle upside down before opening it because it mixes real ginger pieces into the drink!

Where you can find these: Fairfield Location: Orange 24 // Eastgate Location: Yellow 7

Catch the other featured beverages from this month here:
Shirakiku Ramune from Japan and OKF Aloe Drinks from China
Hawaiian Sun Soft Drinks and Teas from Hawaii and Mezzo Mix Orange Cola from Germany
Almdudler Soft Drinks from Austria and Ting Sparkling Beverages from Jamaica