Cajun or Creole? What’s the Difference?

Back to feed
Comments Off on Cajun or Creole? What’s the Difference?

Cajun or Creole. Do you know the difference? Though both of these cultures are present in Louisiana, they are two separate and distinct groups of peoples.

Cajun people are actually descended from French Canadians who lived in Acadia, a broad area along North America’s eastern coast that now consists of Maine, Quebec, New Brunswick, and Nova Scotia. This area was colonized by French settlers, but they clashed with British armies beginning in the early 1700s. This culminated in the French and Indian War, also called the Seven Years’ War, that lasted from 1754 to 1763. Ultimately, the British defeated the French and they began deporting thousands of French Canadians from Acadia. Many of these Acadians voluntarily moved or, later, were forcibly exiled to Louisana, which was then a French colony. The French officials there were welcoming to the exiled Acadians and gave them food, supplies, and land. This hospitality caused many Acadians to settle permanently in Louisiana. Over time, the name Acadian evolved into the moniker Cajun, which developed by dropping the “A” in “Acadian” and short-cutting the pronunciation.

While the Cajun people are descended from a very specific group of French Canadians, Creole is a term that encompasses a much broader group of people. Creole refers to the much wider Caribbean community that developed from the French, Spanish, African, Asian, and indigenous South American peoples that populated the Caribbean in colonial times. Creole culture is alive and thriving in Louisana, but you’ll also find that many people in the Caribbean, in South American, and in countries around the world identify as Creole, too!

In Louisiana, both Cajun and Creole cultures and their foods are alive and thriving. Though they have mixed over the years and have many similarities, they are still distinctly different cuisines. So, how do you tell them apart? The easiest way to distinguish the two is to look for tomatoes! If a recipe calls for tomatoes, it’s likely a Creole dish. There are a few Cajun dishes that do use tomatoes, but they are never treated as a staple. On the other hand, Creole dishes almost always use tomatoes! If a recipe for gumbo or jambalaya needs diced tomatoes, tomato paste, or tomatoes in any other form, it’s more than likely a Creole recipe.

The tomato trick is an easy way to tell which type of food you’re eating, but there are actually more complicated differences between the two that stem from differences in history. Since the Cajun people are descended from French Canadians, Cajun food has retained a lot of the hallmarks of French cuisine. The holy trinity of Cajun cooking includes onion, celery, and bell pepper, a combination that is based on the French mirepoix. Mirepoix is a flavor base that is used to enhance simple dishes like soups, but the French version uses carrots instead of bell peppers. Cajuns used these simple, but flavorful, vegetables because they were cheap and easy to grow in their own gardens. Cajuns lived in the country, on the land that was given to the displaced Acadians, and they didn’t have much wealth or many resources. Because of this, they used everything that was available to them and relied on foods that were easy to grow. This mentality is evident in boudin, a Cajun sausage made of pork and rice, and other sausages like andouille and tasso, which were invented to utilize every part of a butchered animal.

On the other hand, most Creole food incorporates a diverse range of ingredients and can sometimes call for complicated processes. In the early eighteenth century, most Creole people had mixed French and Spanish ancestry. However, over the years, Creole became a term that referred to someone with mixed European, African, and Native ancestry, and many Creoles claimed a combination of French, Spanish, Italian, African, Portuguese, Caribbean, Native, and even German heritage. These international influences are evident in Creole cooking and distinguish it from the French-based Cajun cuisine. Plus, most Louisiana Creoles lived in the city of New Orleans, meaning that they had ready access to a variety of ingredients that came in through the city’s port. While the Cajuns were limited to what could be grown in their gardens, the Creoles had a wealth of ingredients at their disposal. This, paired with a greater variety of cultures, is why tomatoes are a hallmark of Creole cuisine but not Cajun.

Though they are not the same, Creole and Cajun foods developed side by side in Louisiana, and both culinary traditions have a significant history. This month, take some time to try a Cajun or Creole recipe or stop by Jungle Jim’s to sample some traditional New Orleans foods! We offer samples on the weekends or, if you’re feeling adventurous, you can check out our recipes for Cajun BBQ Shrimp and Easy Shrimp Creole! 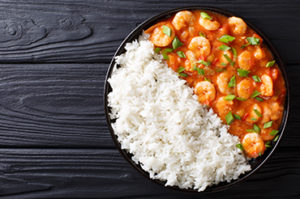 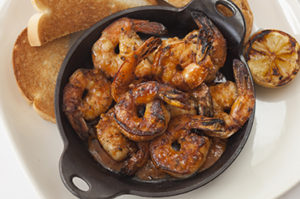